Next up on Goldman Sach's consumer unit growth plan is checking 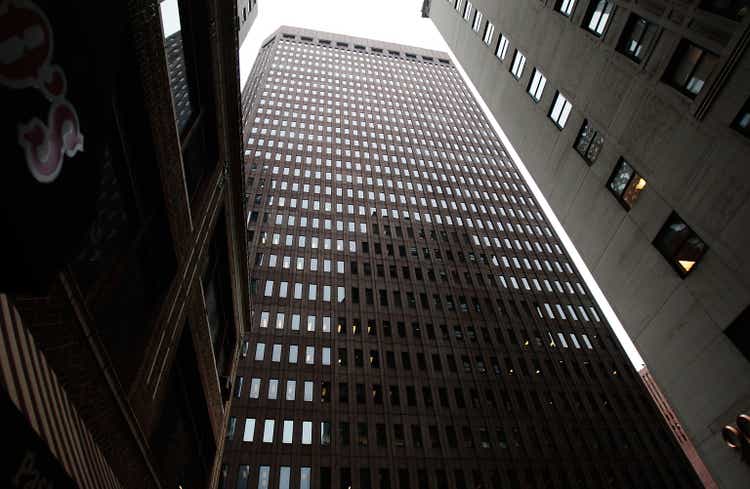 Chris Hondros/Getty Images News Goldman Sachs (NYSE:GS), long the prestigious Wall Street bank that advises companies on mergers and underwrites stock and bond offerings, has made big moves in entering the consumer banking space in the past few years. Management talked about its growth plan on the company's Q1 earnings call. Goldman has built its global digital consumer bank, which it calls Marcus, to 13M active customers from less than 10M a year ago, said Chief Financial Officer Denis Coleman. "Next up on the product road map will be the launch of checking," he said. "We're already piloting that internally, and we expect to launch that more broadly to our clients later this year." Chairman and CEO David Solomon also points to the progress the Wall Street bank has made in that arena. The company has already made most of the investment required to drive the $4B revenue target it issued for the consumer business in February. Consumer Banking revenue was $483M in Q1, up 28% from Q4 2021 and up 30% from Q1 2021. As it continues to grow its consumer business and lending, Goldman (GS) is also aware that "macro headwinds and inflationary pressures could potentially weigh on payment rates, and thus portfolio performance," Coleman said. The company's Q1 provision for credit losses of $561M increased from $344M in Q4, reflecting its lending portfolio growth and a slowing macro growth outlook. "So that's something that we expect across these businesses as we grow them. We expect as we grow the portfolio of GreenSky that will also continue to provision," he added. Goldman (GS) added to its consumer business last month when it completed the $2.24B acquisition of GreenSky, a platform that offers loans to consumers for big purchases like home improvement projects or elective medical procedures. Furthermore, the company remains confident that its partnership with Apple (AAPL) is paying off, even after Bloomberg reported last month that the tech giant has mapped out a plan to reduce its reliance on their parties. "Our partnership with Apple (AAPL) is very, very strong," Solomon said on the call. "I would just say we're very comfortable with the opportunity set in front of us with that partnership." Earlier, Goldman Sachs (GS) Q1 earnings showed the strength of its Global Markets, Consumer, and Wealth units
GS AAPL