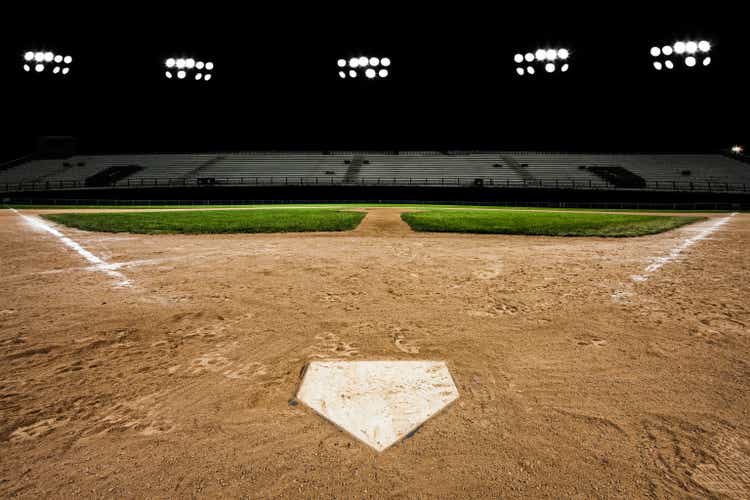 jgareri/E+ via Getty Images Apple (NASDAQ:AAPL) will be shooting for a home run on Friday night as it steps up to the plate with its first live sports broadcast. Friday Night Baseball will debut on Apple TV+ with a streaming doubleheader as the New York Mets meet the Washington Nationals at 7 p.m. and the Los Angeles Angels host the Houston Astros at 9:30 p.m. ET. Apple reportedly paid $85M for the two games each week, which will be available for free for a limited time without having a $4.99/monthly subscription to the streaming service. More details: "Throughout the Friday Night Baseball broadcasts, fans can enjoy on-screen callouts about batters’ walk-up songs from Apple Music, test their knowledge of baseball trivia with help from Siri, and more," Apple wrote in a blog post. "Friday Night Baseball will also incorporate new on-screen graphics that include innovative new probabilities-based forecasts of different situational outcomes, plus highlights and live look-ins from around the league integrated right into the broadcast." The deal with Apple TV+, which had about 20M paid subscribers in 2021, comes after ESPN (DIS) slashed its broadcast rights to MLB games this season. It's also part of Apple's push to generate more cash flow from an expansion into online services. Streaming rival Amazon (AMZN) aired several Yankees games back in 2019 and just inked an 11-year agreement (valued at $1B per year) to exclusively stream Thursday Night Football games on the Prime Video app. Outlook: Niche sports leagues may be the next frontier in acquisitions for the ravenous streaming industry, according to CNBC's Alex Sherman, who observes that rising sports rights fees mean content giants will be paying up one way or another. The trends point the way toward a potential buyout for groups like Formula One (FWONA), NASCAR, World Wrestling Entertainment (WWE) or Ultimate Fighting Championship (EDR). Interestingly, ESPN has paid $1.5B for five-year UFC TV rights through 2025, and a renewal could set back the company even more after passing on a $4.3B deal to buy the sports company outright in 2016.
AAPL DIS AMZN