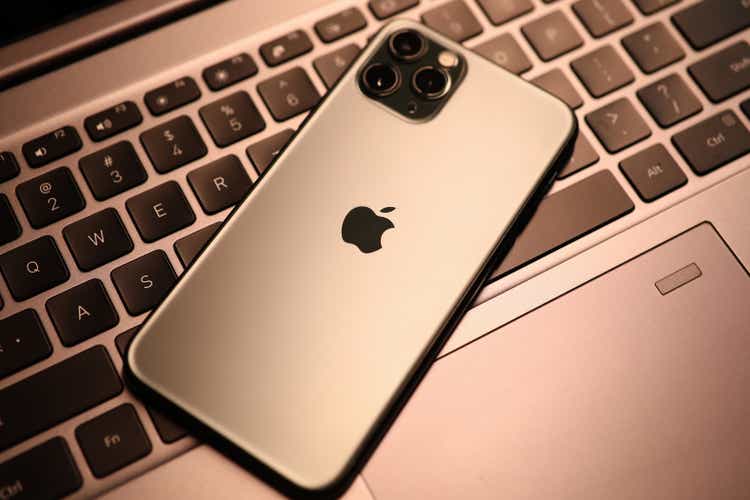 Ivan-balvan/iStock Editorial via Getty Images Apple (NASDAQ:AAPL) may still get more than half of its sales from the iPhone, but its services, including Apple Music, Apple TV+ and iCloud are increasingly becoming a "key differentiator," according to investment firm UBS. Analyst David Vogt, who rates Apple buy with a $185 price target, surveyed more than 4,000 iPhone users from four different geographies and found that U.S.-based upgrades and retention are still high, as 81% of users upgraded from a prior iPhone, up 4% year-over-year. The survey also found that iPhone handset age is around 2.3 years, up from a previous 2.1 years and that roughly 35% of the iPhone base is more than three years old and 25% is more than four years, "suggesting pent up demand." Apple (AAPL) shares rose slightly more than 1.5% to $177.11 in early trading on Monday. Other key findings from the survey include that Music, iCloud, Arcade and Fitness rates are higher (excluding China), while News is "flattish" and Apple TV+ looks to have plateaued. Users with higher-end devices, such as the iPhone 12 and 13, also drive Apple services revenue. App Store spending has "moderated" a bit following "COVID-related strength" and Apple Pay adoption continues to increase. "Respondents in the survey noted spending increased in Japan, was flattish in the US and the UK and down in China," Vogt wrote, concerning App Store spending. The analyst added that while it is one data point, it is worth watching "given Mar-Sept Services revenue comps are tough." On April 1, Apple (AAPL) was removed from J.P. Morgan's Analyst Focus List, with the investment firm citing worries over consumer spending.
AAPL