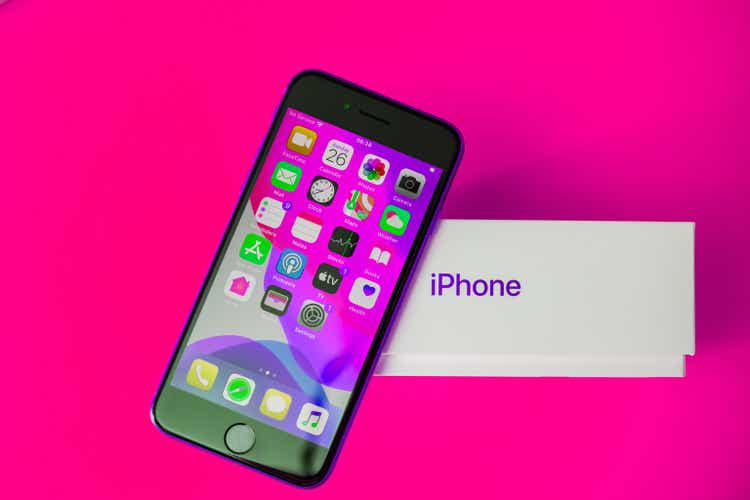 AdrianHancu/iStock Editorial via Getty Images Apple (NASDAQ:AAPL) iPhone builds have dropped another 9 million to 254 million, Loop Capital said in a research note, citing "reads," cautioning additional cuts are coming in the not too distant future. Analyst John Donovan, noted that Apple is likely to cut its iPhone build orders for 2022 to be between a range of 245 million and 250 million, adding that the iPhone SE, which was announced last month, is likely to have its orders cut by 20 million. In conjunction, Donovan noted that Apple is likely to raise iPhone 13 builds, but only half of the decline in the iPhone SE, as consumers opt for larger devices. "Citing several factors such as the Ukraine-Russia war, supply chain disruptions, and other usual rationale, digging deeper we are uncovering some additional insights," Donovan wrote in a note to clients. In addition to concerns about inflation, Donovan added "that the smaller form factor iPhones have a finite following." Apple (AAPL) shares rose slightly less than 0.5% to $174.80 in premarket trading on Monday. Following the "dismal" results of the iPhone 12 Mini and iPhone 13 Mini, Donovan believes that Apple (AAPL) has finally realized that smaller iPhones have "limited appeal" and given the wide availability of the iPhone 13, the iPhone SE is unlikely to sell well. "Despite this, clearly this lack of demand is surprising to AAPL and the pivot to more iPhone 13’s is underway," Donovan explained, adding that it was a "savvy move" by Apple to use the same processor for the iPhone SE with 5G and iPhone 13. Donovan also noted that Apple (AAPL) has been looking at an iPhone SE Plus product for future iPhone releases, which further solidifies that smaller devices are likely to remain "niche products." On April 1, Apple (AAPL) was removed from J.P. Morgan's Analyst Focus List, with the investment firm citing worries over consumer spending.
AAPL