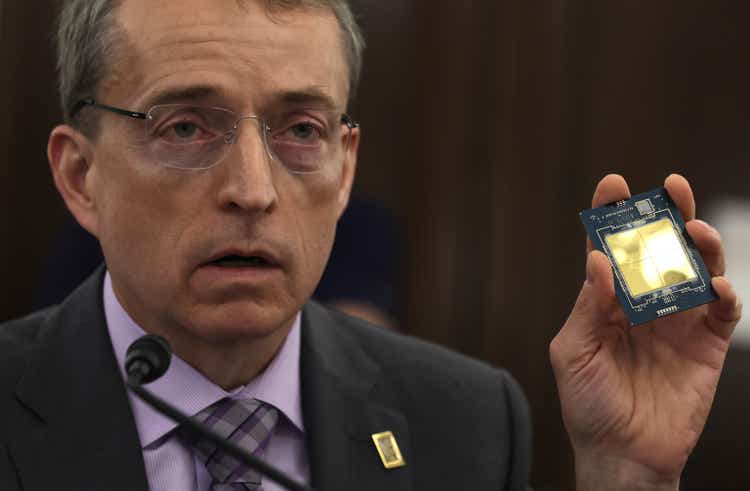 Alex Wong/Getty Images News Intel (NASDAQ:INTC) Chief Executive Pat Gelsinger earned more than 1,700 times what the average employee at the chip giant made, according to a newly published regulatory filing. Gelsinger, who joined Intel from VMware (VMW) in February 2021, earned $178.59 million in compensation, which includes stock awards. In contrast, the average Intel employee made $104,400, the filing said. For comparison purposes, former Intel CEO Bob Swan had a compensation ratio of 217 to 1 when he left the chip company in 2020. Included in the $178.59 million was a one-time equity award worth roughly $110 million. Prior to leaving VMware, Gelsinger had worked for Intel (INTC) for more than 30 years in a variety of different roles. Intel (INTC) shares fell slightly less than 0.5% to $52.07 in early trading on Wednesday. Santa Clara, California-based Intel is set to hold its annual shareholders meeting in May, where it will ask shareholders to vote on a number of topics, including executive compensation. Exorbitant executive compensation has been a major source of consternation for some shareholders in recent memory, including activist investors. On Tuesday, activist investor Carl Icahn called out Kroger's (KR) board of directors for giving its Chief Executive, Rodney McMullen, a pay package that is 900 times what the average employee at the supermarket chain earns. Gelsinger is attempting to turn around Intel (INTC), which has fallen behind in the semiconductor industry, as companies like Nvidia (NVDA), Advanced Micro Devices (AMD) and Apple (AAPL), which recently moved away from Intel chips for its Mac computers, continue to make performance gains. Intel recently announced it would build a $20 billion plant in Ohio and invest as much as $88 billion in Europe over the next decade to boost chip production. Earlier this month, Intel's (INTC) Gelsinger, along with the CEOs of Micron (MU) and Lam Research (LRCX) testified in front of the U.S. Senate to ask for more government funding to help combat the global semiconductor shortage and increase American competitiveness for semiconductors.
INTC VMW KR NVDA AMD AAPL MU LRCX