Intel, Micron, among CEOs to ask for more gov't funding, but it's not a 'silver bullet,' BofA says 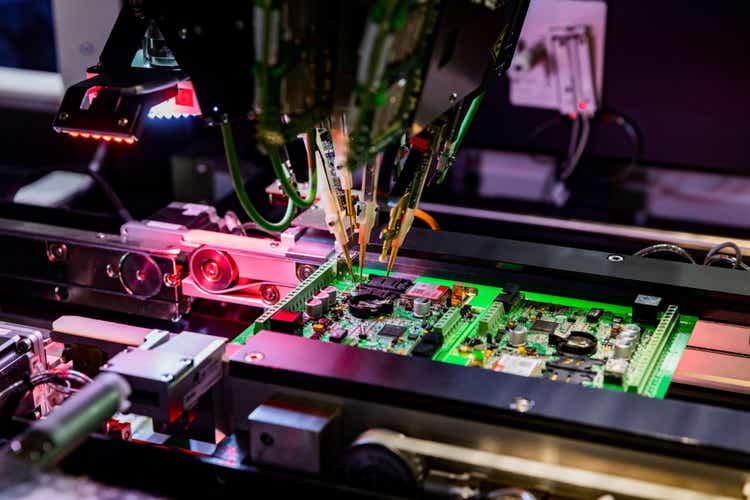 Aguus/E+ via Getty Images The chief executives of Intel (NASDAQ:INTC), Micron (NASDAQ:MU) and Lam Research (NASDAQ:LRCX) will testify in front of the U.S. Senate to ask for more government funding on Wednesday, as the legislative chamber debates the American competitiveness for semiconductors, amid the global shortage. While additional government support, like the CHIPS portion of 2021's U.S. Innovation and Competition Act and this year's America COMPETES Act are useful, it is not a "silver bullet," according to Bank of America analyst Vivek Arya. "We believe $50 [billion] could be available, if funded, to stimulate domestic semiconductor manufacturing and R&D, similar to recent [43 billion Euros] fund to double Europe’s share of global semi manufacturing (to 20% by 2030)," Arya wrote in a note to clients. However, there needs to be a more geographically diverse supply chain that is not as reliant on Taiwan and China, but Arya said he is "skeptical" that additional subsidies could address these issues "anytime soon." Neither Intel (INTC) or Micron (MU) could fix these issues, as near-term shortages are mostly in trailing edge chips for automotive and industrial areas, not in PCs or memory, where Intel and Micron largely operate. Additionally, a "credible" alternative to Taiwan Semiconductor (TSM) would require a dedicated foundry with broad experience, which Arya said no U.S. foundry appears equipped for. Many of Taiwan Semi's large customers, such as Advanced Micro Devices (AMD), Apple (AAPL), Nvidia (NVDA) and Qualcomm (QCOM) are either competing against Intel or are not sure about using a foundry that could be two years behind Taiwan Semi. Lastly, spending $50 billion for an industry that spends anywhere between $280 billion and $300 billion on capital expenditures would be seen as "good," but not large enough, especially when other areas of the supply chain, such as testing, wafers and raw materials are considered. In January, Taiwan Semi's Chief Executive C.C. Wei said the company would spend up to $44 billion this year to expand production. Arya notes, however, that companies like GlobalFoundries (GFS), Texas Instruments (TXN) and certain equipment vendors like Applied Materials (AMAT) and Lam Research (LRCX) could benefit more than Intel (INTC), even if it gets most of the monetary benefit from any U.S. legislation. GlobalFoundries (GFS) already has an established U.S.-based foundry with relationships from companies like Ford (F), BMW and others, while Texas Instruments (TXN) recently said it would boost spending for domestic trailing edge analog and embedded fabs. The equipment companies would benefit from additional manufacturing capacity, Arya added. If the U.S. government really wanted to make a big push, it could convince Taiwan Semiconductor (TSM) to rethink its western manufacturing plans and having leading-edge production, for 3 and 2 nanometer production. Taiwan Semi is building a Phoenix, Arizona-based plant that will likely produce 5 nanometer-sized chips and could operational in the 2024-2025 timeframe, Arya explained, though recent reports suggest it is behind schedule. Earlier this month, Intel (INTC) said it would invest approximately $88 billion, or 80 billion Euros, in chip manufacturing in Europe over the next decade, including an $18.6 billion mega fab in Germany.
INTC MU LRCX TSM AMD AAPL NVDA QCOM GFS TXN AMAT F